LATEST NEWS about Our Projects and Services 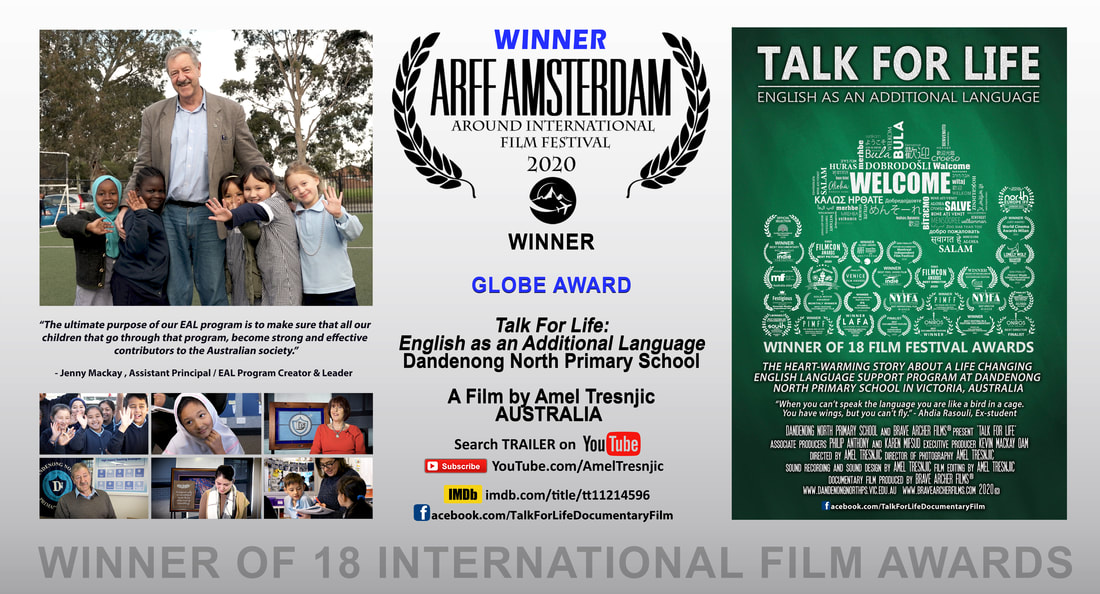 I am super proud to announce that Talk For Life has won ‘The Globe Award’ at the 2020 Around International Film Festival Amsterdam Edition! What a way to end the year! The prestigious Globe Award is dedicated to the best inspirational story with a powerful globally focused message, whilst utilising the tools of filmmaking in the most engaging and unique way. Tonight is not just about celebrating New Years, but also celebrating 17 marvelous awards that Talk For Life has won in 2020. What an amazing journey so far and I can’t wait to see what 2021 has in store for us! Wishing everyone a Happy, Safe and COVID Free 2021! 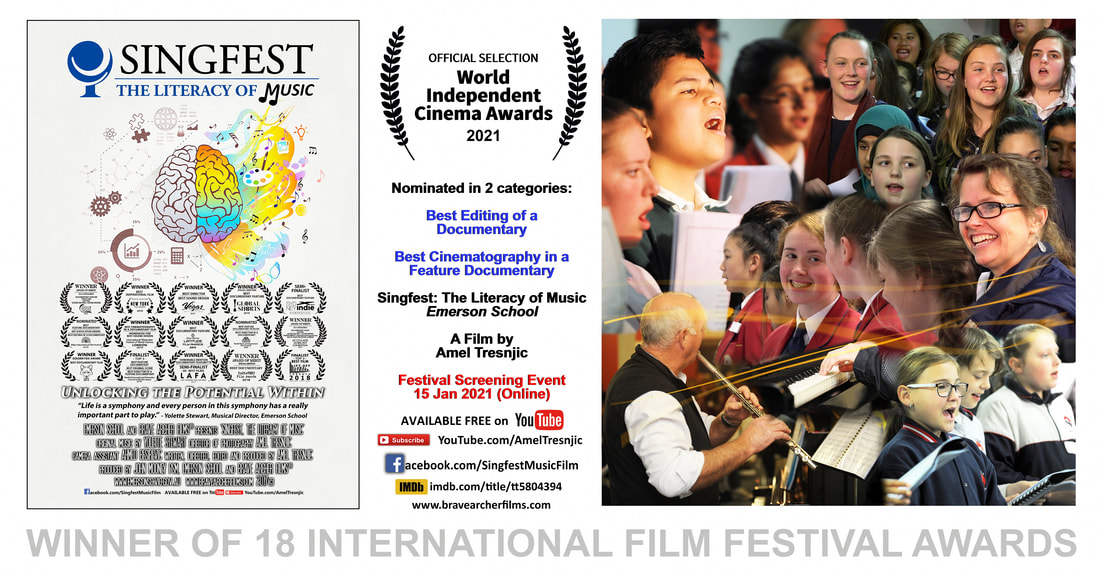 I am super excited to announce that the festival journey for our film Singfest: The Literacy of Music is not yet over. The feature documentary focusing on the importance of Music Literacy in Education wrapped up the festival circuit last year taking home 18 International Awards.

The Film has been Officially Selected by the prestigious 2021 WORLD INDEPENDENT CINEMA AWARDS. This is a very special event honoring the best independent global films from the 2019/2020 festival season. Singfest has been nominated for Best Editing of a Documentary & Best Cinematography in a Documentary. Being recognised in this special Awards Ceremony and to compete with the best of the best from 2019/2020 is already a huge win! A HUGE congratulation to John Mooney and the inspiring teaching staff at Emerson School. This feature documentary is available free on YouTube:
Trailer: https://www.youtube.com/watch?v=yaMFp6zrKE4
Film: https://www.youtube.com/watch?v=8e5zWsQ4UAI
Film's Official Facebook Page Singfest: The Literacy of Music
I am proud to announce that 🏆Talk for Life🏆 has won Best Editing of a Documentary at the 2020 South Europe International Film Festival this morning! What a fantastic recognition, thank you to the festival directors Dan Hickford, Steve Grossmith and the rest of the team, it was an amazing week of events with more excitement yet to come..☺️ You guys put so much love into this festival! 🙏 This is a must for anyone ready to start their festival circuit: fusionfilmfestivals.com
A huge congratulations to the fellow Nominees, what a fantastic selection of films. All of you deserve this win! Brilliant Work! 👏👏 As always, a huge congratulations to Dandenong North Primary School and everyone involved. Its your passion for what you do that shines through the documentary and captures people every time!! 🙏🏆 Below is a little video clip of my reaction from this morning 😄 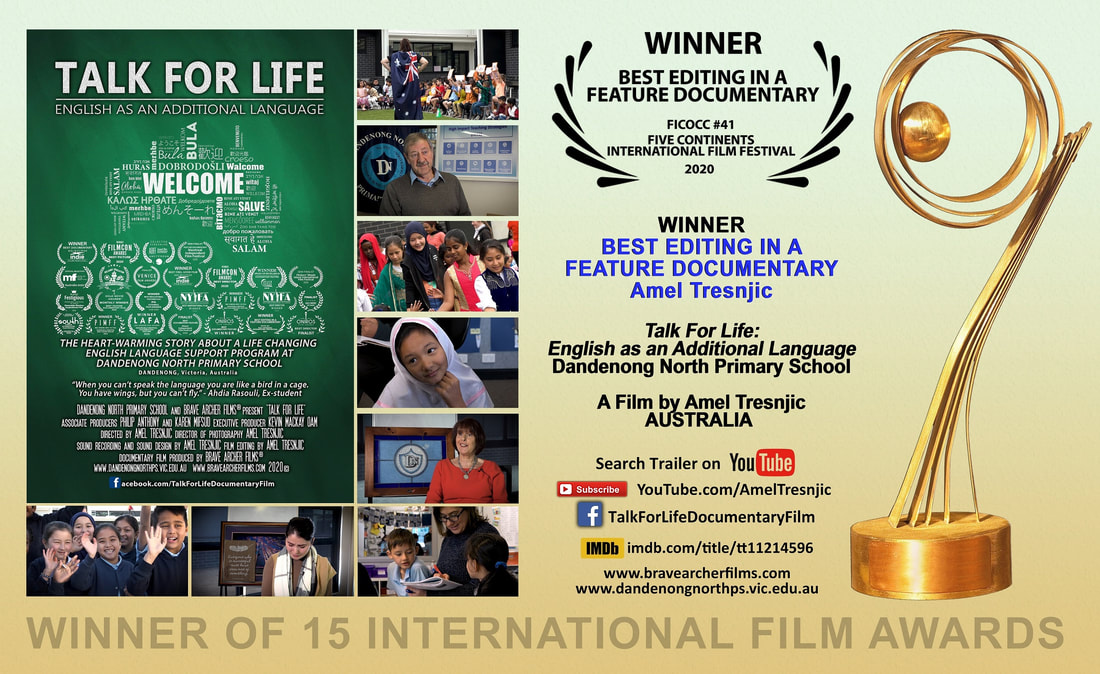 Without the humanitarian leaders and teachers who I had the privilege to interview in this film, and the inspiring success stories of both current and former students, I would not have been able to edit so well This is a team effort that we can all be proud of! 🙏

Congratulations to Kevin and Jenny Mackay and the fantastic EAL team at Dandenong North Primary School! What you do every day is truly inspiring!  👏 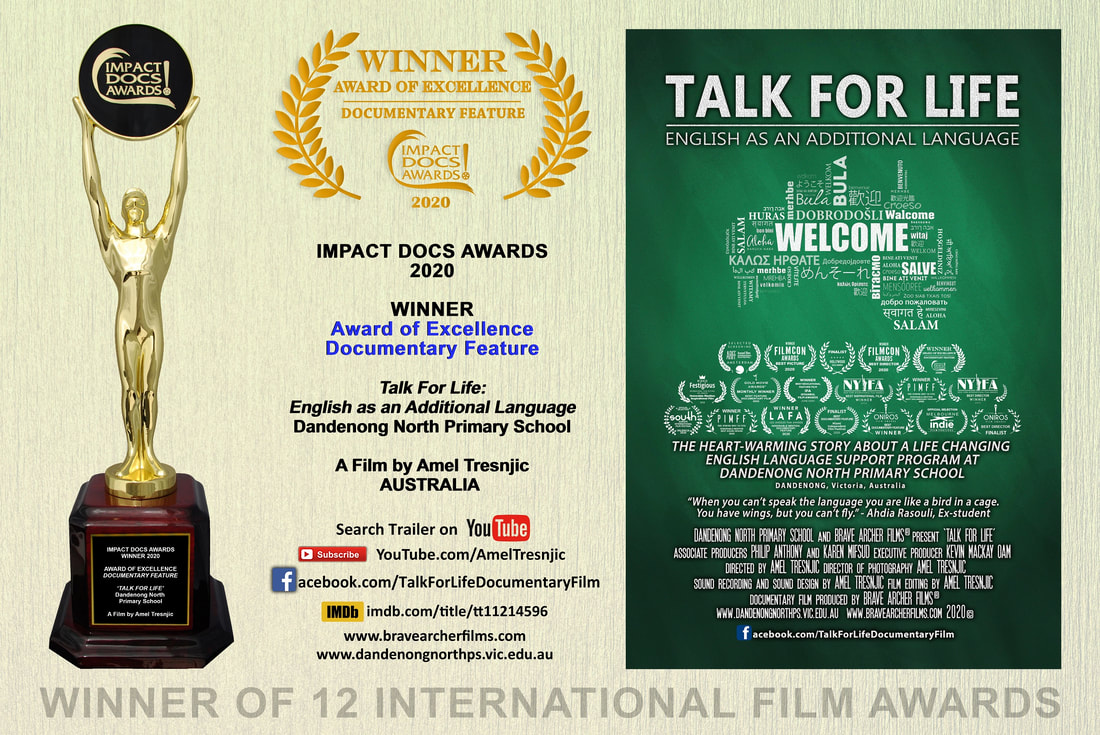 Very Exciting News! Talk For Life wins the 'Award of Excellence for Documentary Feature' at the 2020 Impact Docs Awards, USA. This is the films 12th Film Festival Award!! 🥰🙏
Congratulations once again to Dandenong North Primary School for the inspiring work that you do! All of these wonderful accolades are because of you👏👏👏👏👏🏆
"A round of applause to this season’s Award of Excellence winners for their exceptional documentaries! Both veteran and fresh new filmmakers created docs that were informative, provocative and entertaining – illustrating the finest in filmmaking craft in every way. The judges humbly salute these fine talented filmmakers!" - Impact Docs Awards 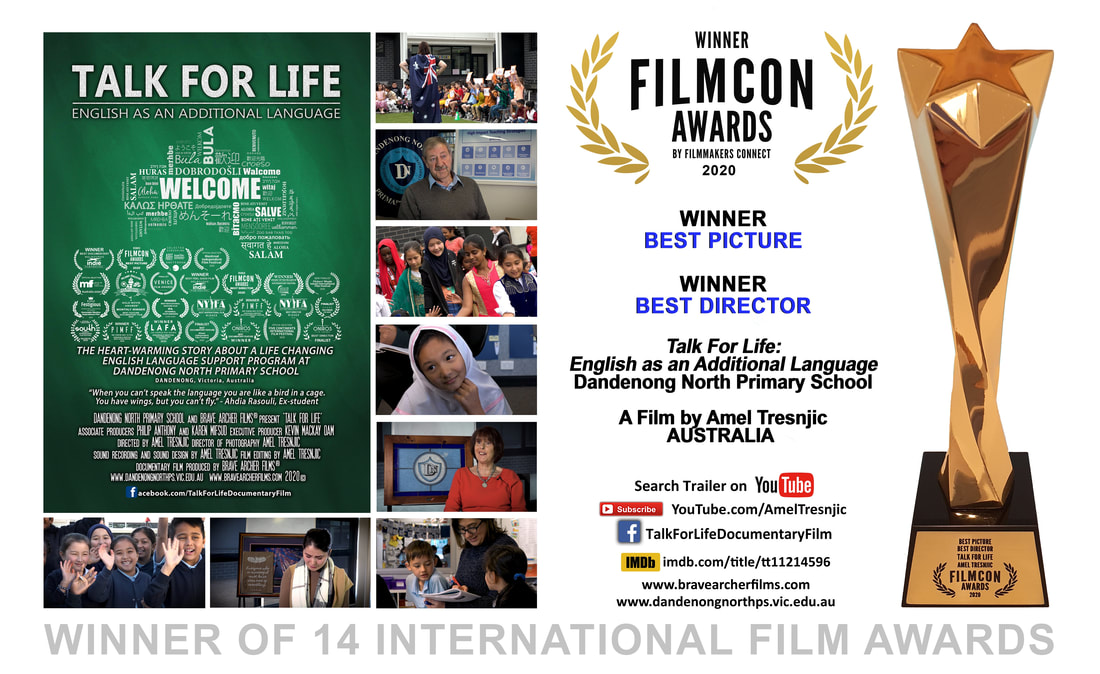 I'm super excited to share this news! 😁 Talk For Life receives the highest award so far by winning BEST PICTURE at the 2020 FilmCon Awards 🏆😁
(The Festival judges wrote a beautiful review on the graphics they sent below)

The BEST PICTURE award was accompanied by a second award BEST DIRECTOR. 🥰🏆🏆
An absolute amazing achievement that we can all be proud of!
Once Again a HUGE Congratulations to the inspiring teachers and leaders of Dandenong North Primary School! 👏👏👏

Here is the link to the official listing where you can also watch the trailer https://www.filmcon.net/june-2020 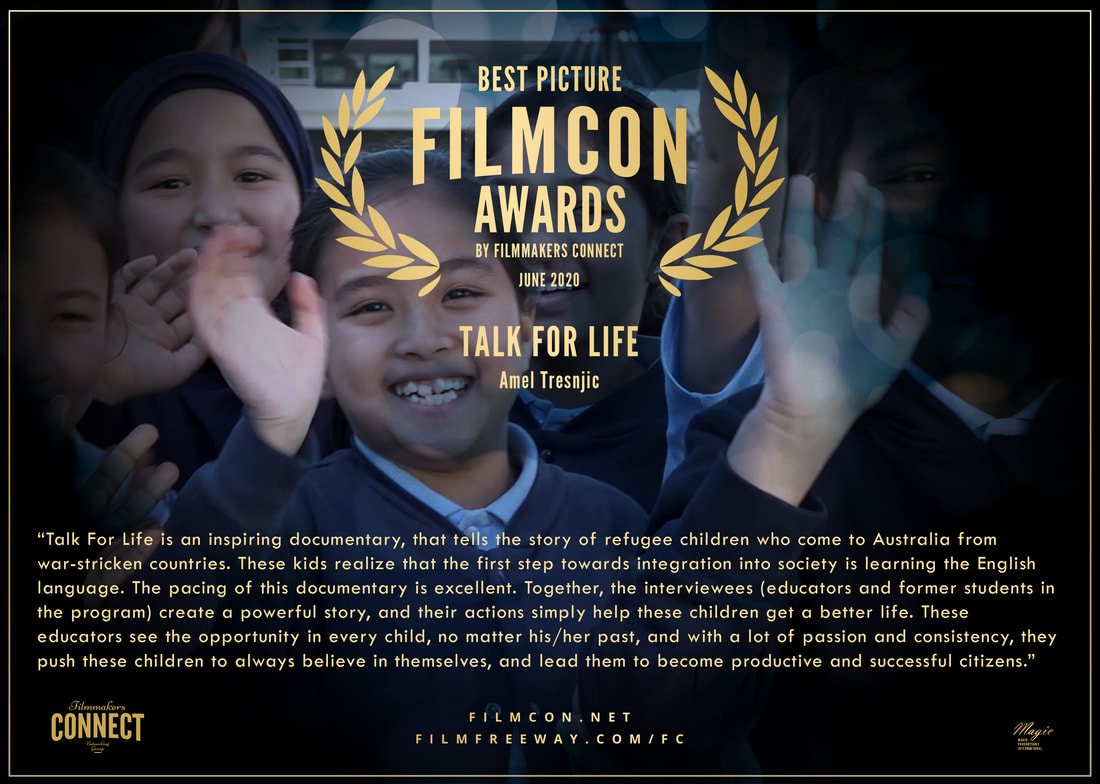 Talk For Life WINS BEST EDUCATIONAL FEATURE FILM at the 2020 Istanbul Film Awards! 🏆🙏🥰 A HUGE Congratulations to the inspiring teachers and leaders at Dandenong North Primary School! You truly make a difference in the world! 👏👏🙏🥰 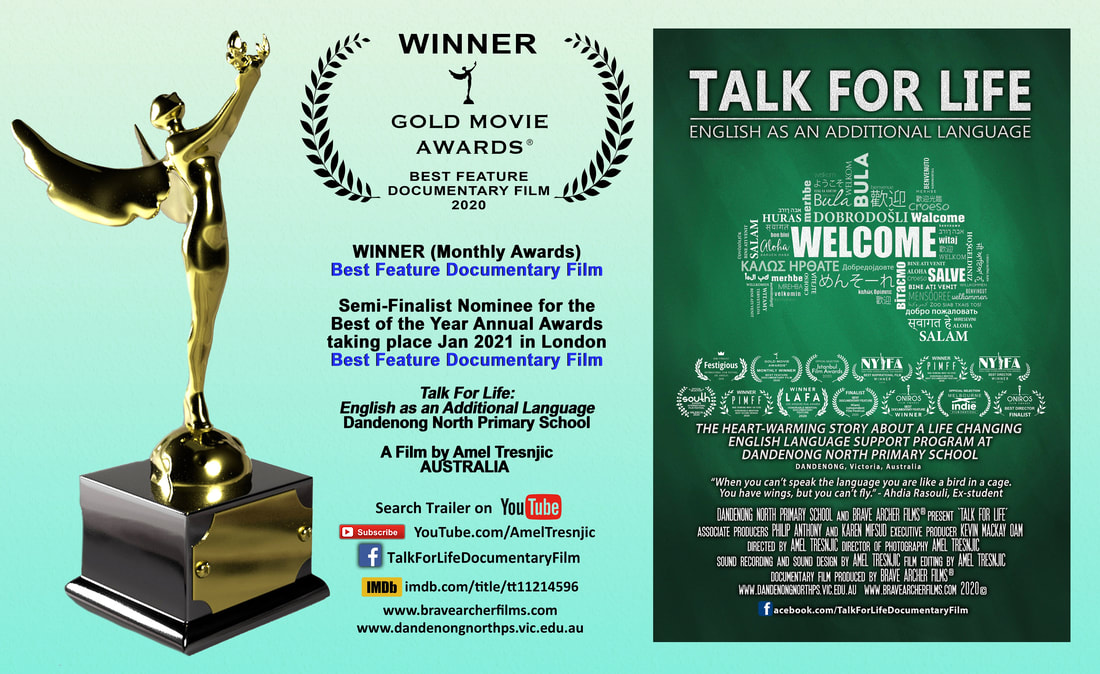 We just received some BIG news from London 😁 Talk For Life has claimed the top prize and WON Best Feature Documentary Film at the Gold Movie Awards in London. This is a win for the Monthly Awards edition of the Festival.🏆 Gold Movie Awards has also placed Talk For Life as a Semi-Finalist for their prestigious Annual event competing with a very few select monthly winners to go for the Big BEST OF THE YEAR PRIZE🤞🙏🥰

Here is a bit of a taste of last years celebrity attendee and fellow nominee Billy Zane:
https://www.youtube.com/watch?time_continue=43&v=ksTRz_P4rLQ
CONGRATULATIONS once again to all the amazing teachers and leaders at Dandenong North Primary School!👏👏👏👏 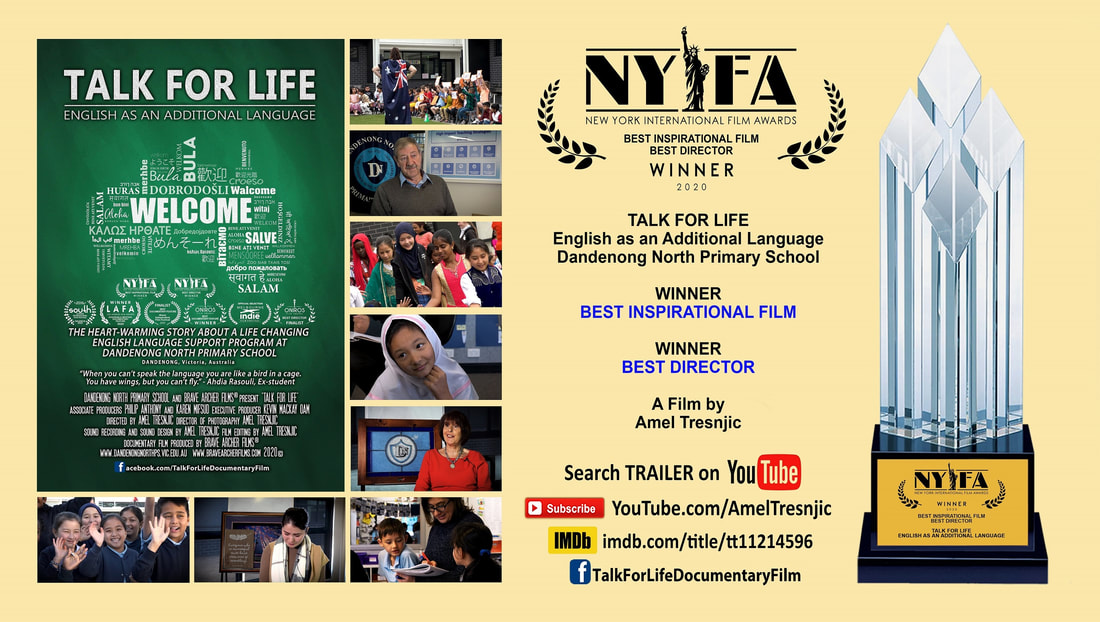 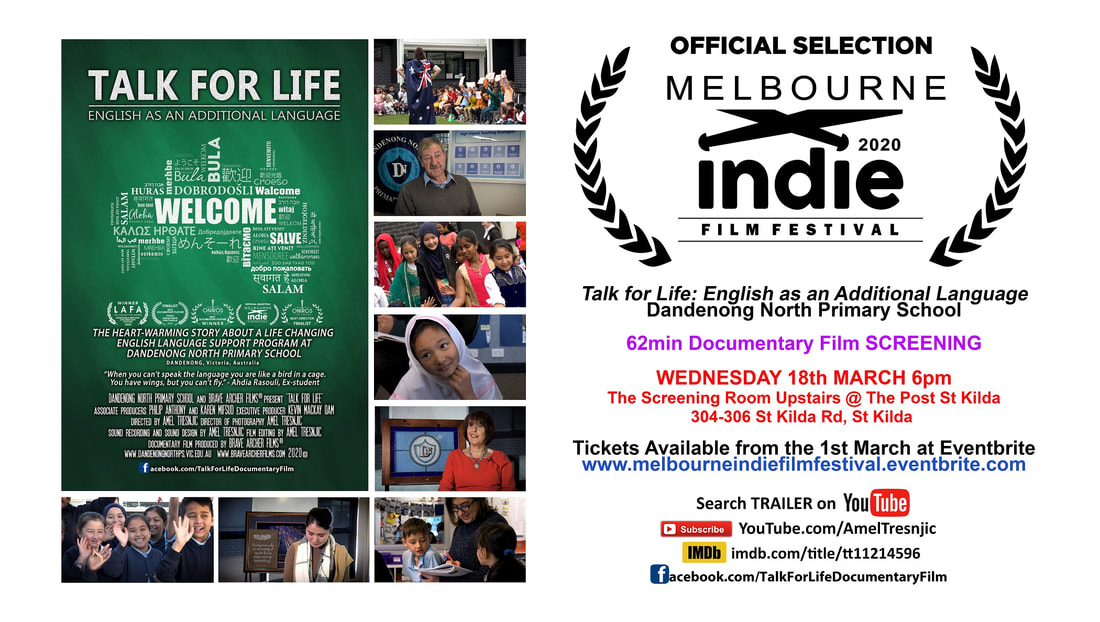 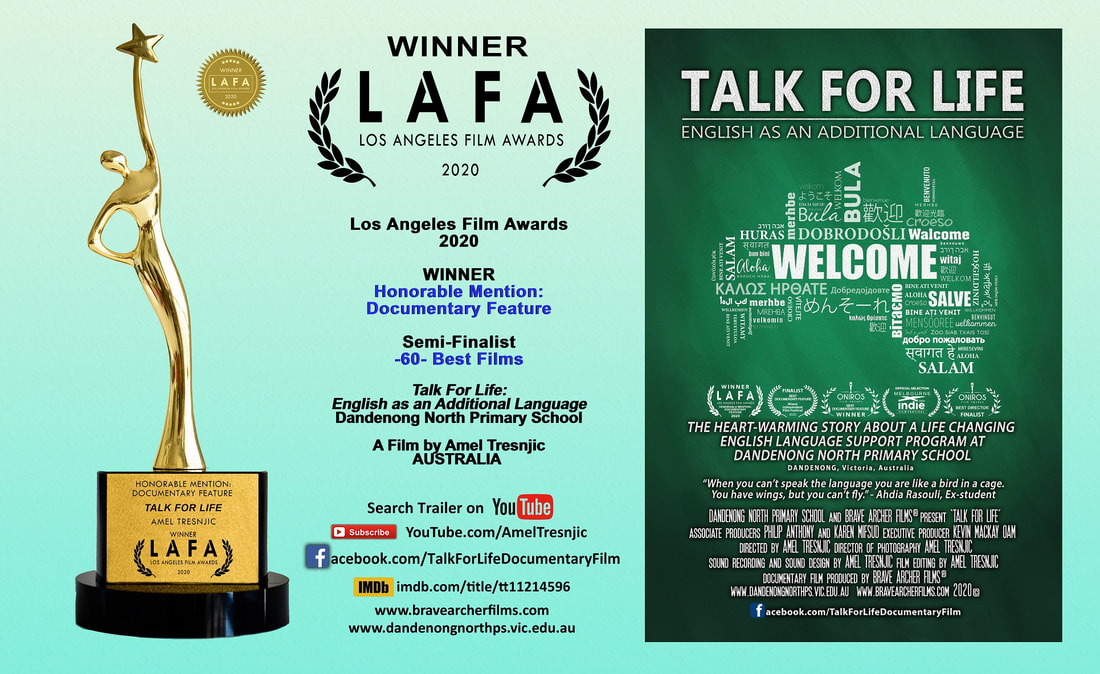 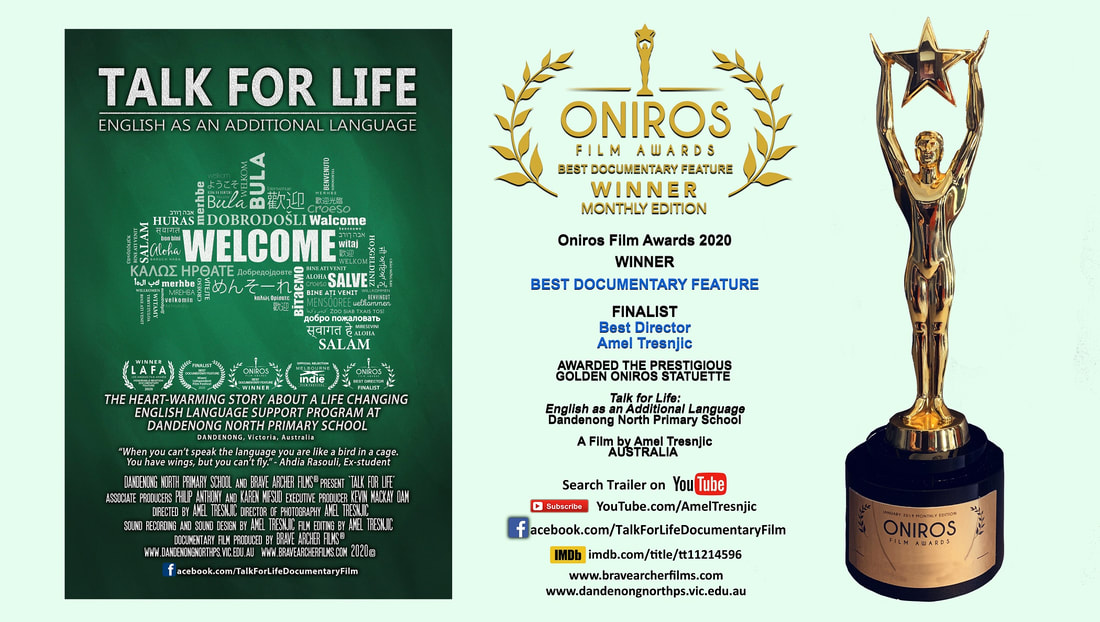 Talk for Life: English as an Additional Language has WON BEST DOCUMENTARY FEATURE at the 2020 ONIROS FILM AWARDS in Italy. 😲🏆🙏 The Film also WON the Honorable Mention: Documentary Feature Award at the 2020 Los Angeles Film Awards. Congratulations to the humanity loving EAL teachers and visionary leaders at Dandenong North Primary School for their extraordinary contribution to society!👏👏👏 Watch the trailer here: https://www.youtube.com/watch?v=n7jsyJq6Sak 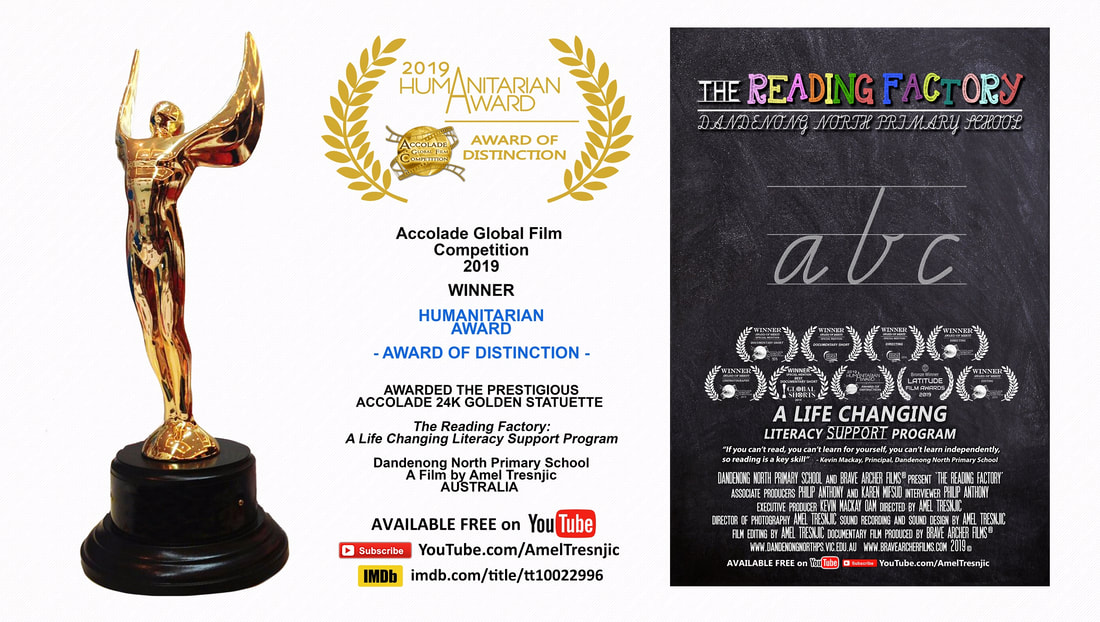 'The Reading Factory: A Life Changing Literacy Support Program' wins its 9th Award 🙏❤️ The film was hand selected by the Accolade Global Film Competition judges from the entire pool of entries to the competition throughout 2019, and nominated on their behalf for a very special category.. Today it was announced that the film won the 2019 Humanitarian Award - Award of Distinction 🏆 This is a fantastic recognition for the important work the staff of The Reading Factory do daily! It truly highlights the crucial and life changing contribution Dandenong North Primary School makes to society! Well done DNPS 👏👏👏 You can watch the film here: 👉 https://youtu.be/96hGQLp4Pq4 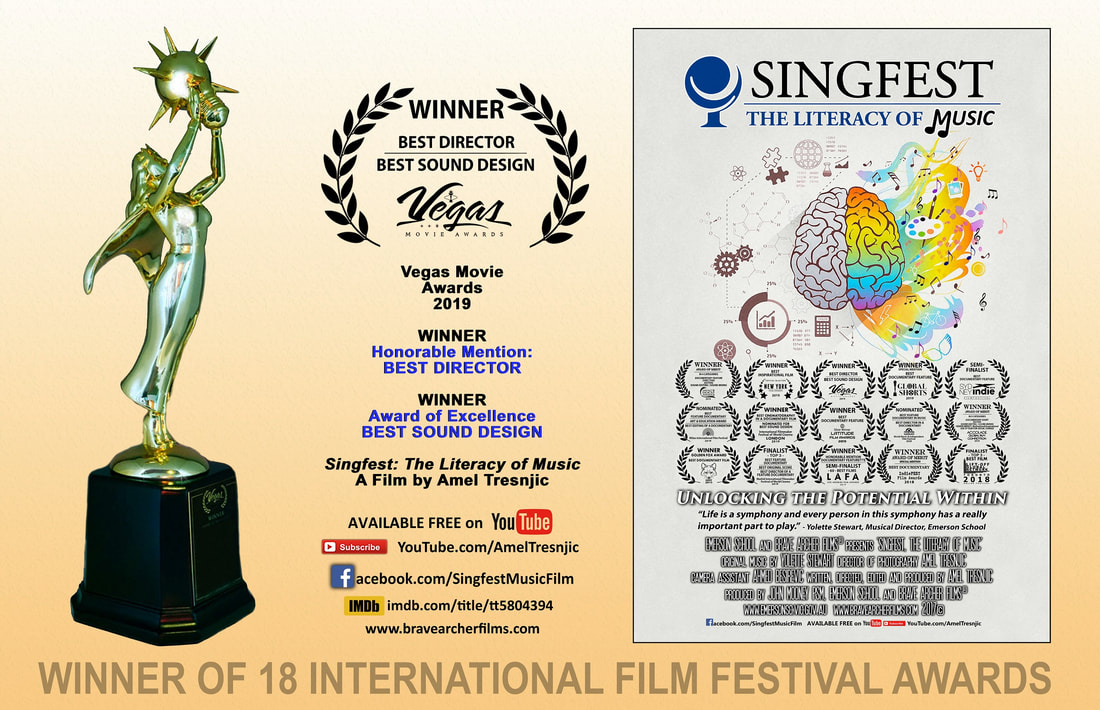 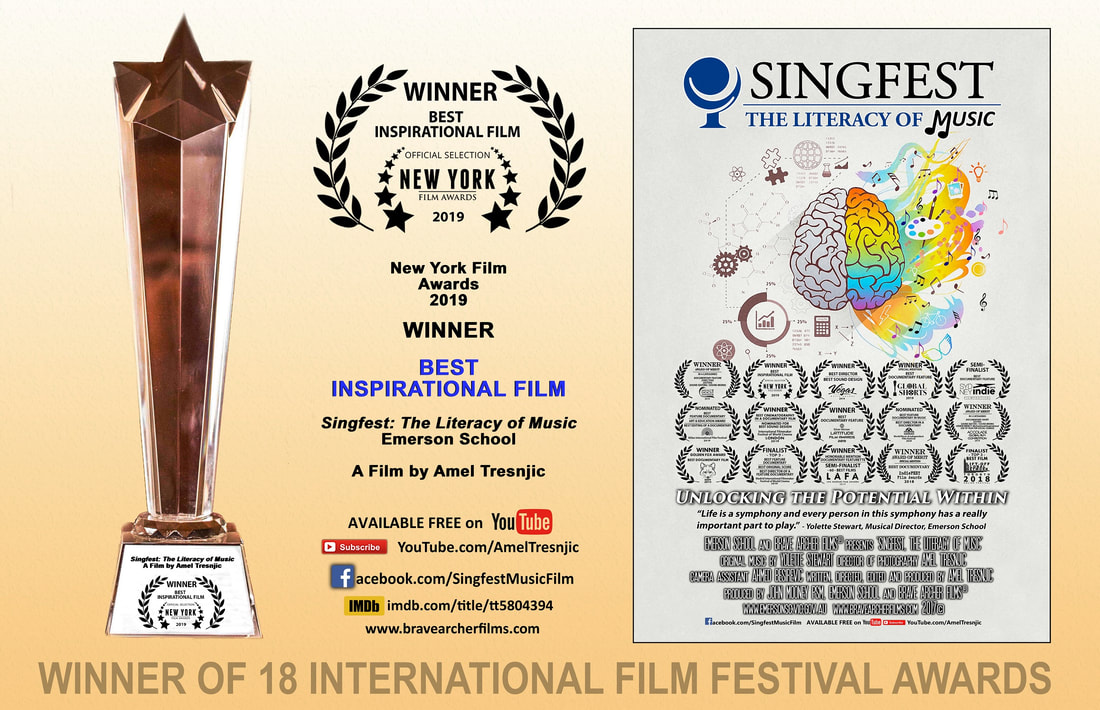 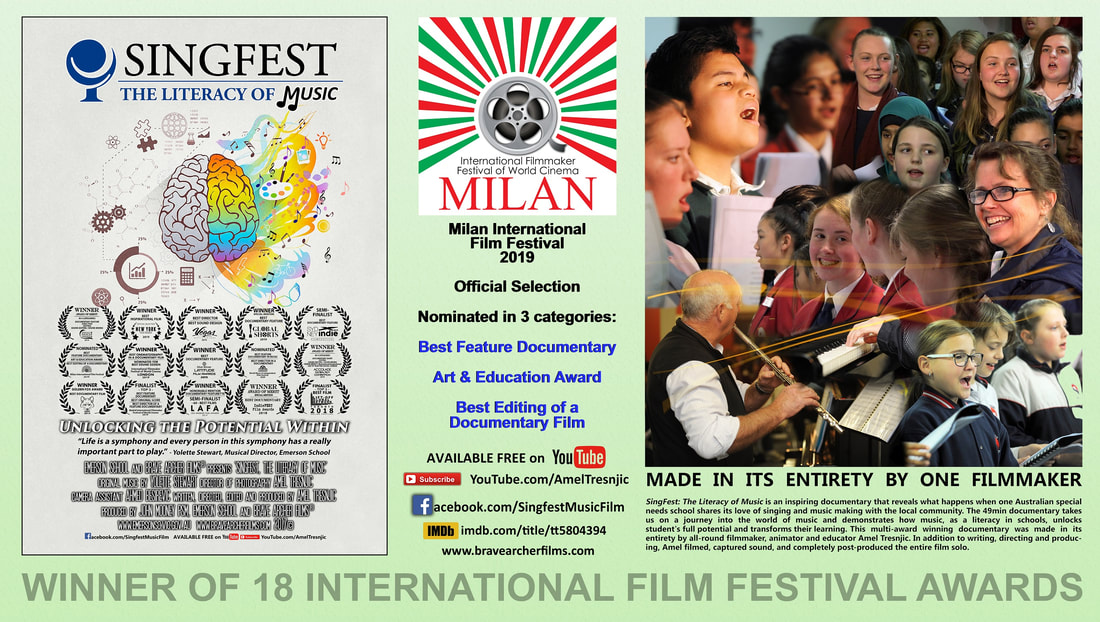 Just Announced, Singfest: The Literacy of Music has been Officially Selected and Nominated for Best Feature Documentary, Best Art & Education Award and Best Editing of a Documentary Film at the 2019 Milan International Film Festival.
Amel Tresnjic Interview about his multi award-winning documentary SingFest: The Literacy of Music. Interviewed by Ray Davies from The Film Industry Network at the Madrid International Filmmaker Festival of World Cinema, August 16, 2019. Interview Produced by: International Filmmaker Festival of World Cinema To learn more about the Festival: https://www.filmfestinternational.com 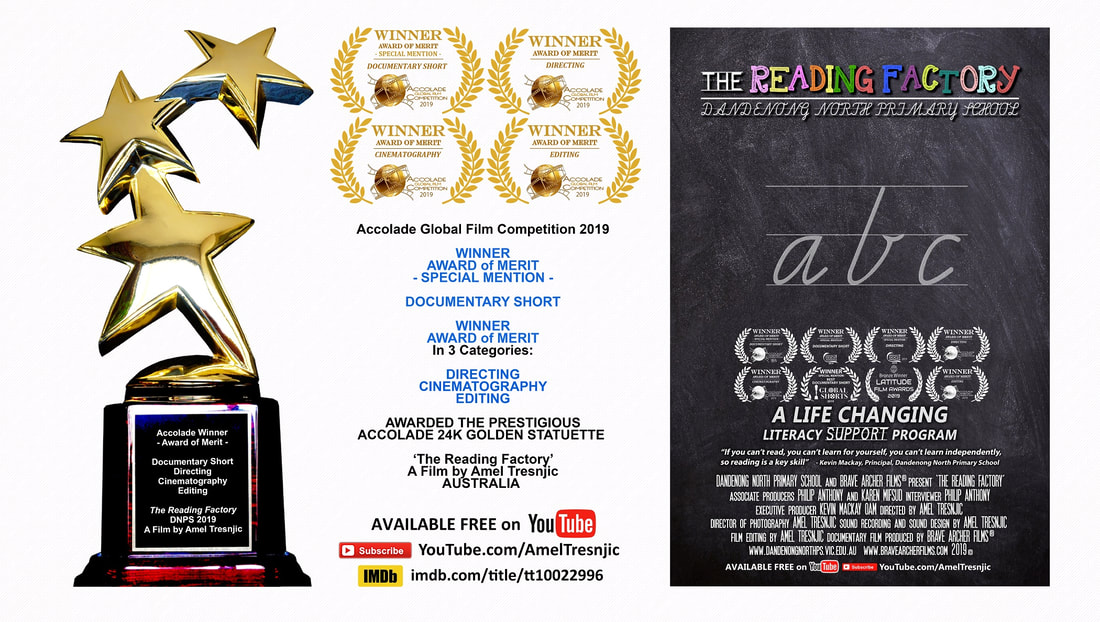 Our latest educational film 'The Reading Factory: A Life Changing Literacy Support Program' which is currently in the Festival Circuit,
WINS 4 Awards at the 2019 Accolade Global Film Competition
🏆🏆🏆🏆

Singfest: The Literacy of Music wins 4 prestigeous Awards at the 2019 Impact Docs Awards. 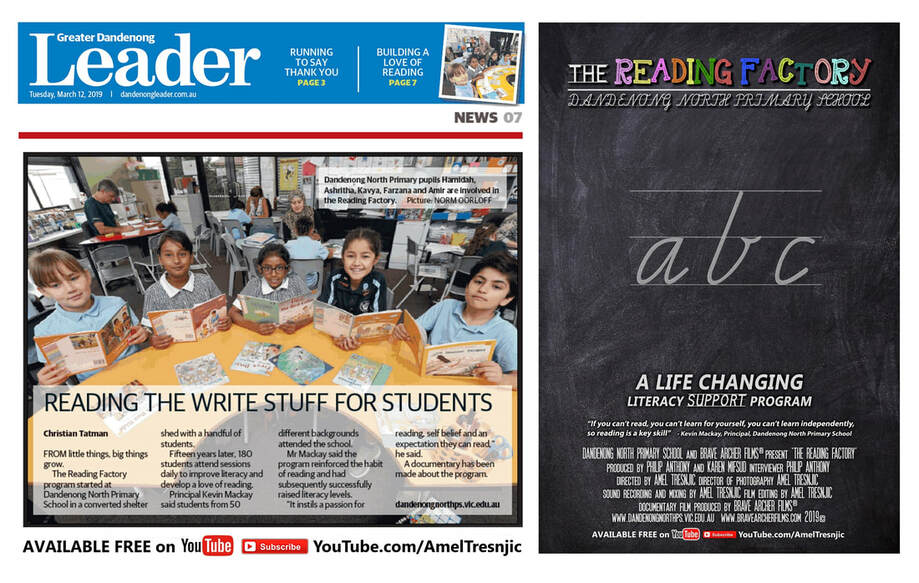 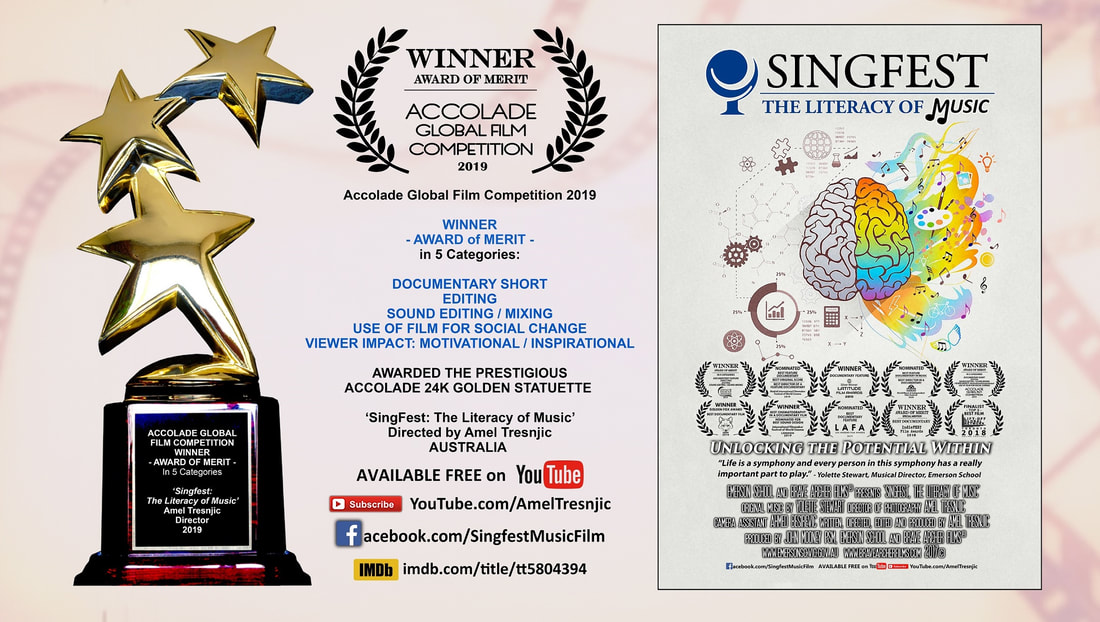 INTERVIEW ABOUT FILM AT THE LONDON INTERNATIONAL FILMMAKER FESTIVAL

Below is an article printed in my home town Bosanska Gradiska, Bosnia for the local newspaper (Bosnian Language) 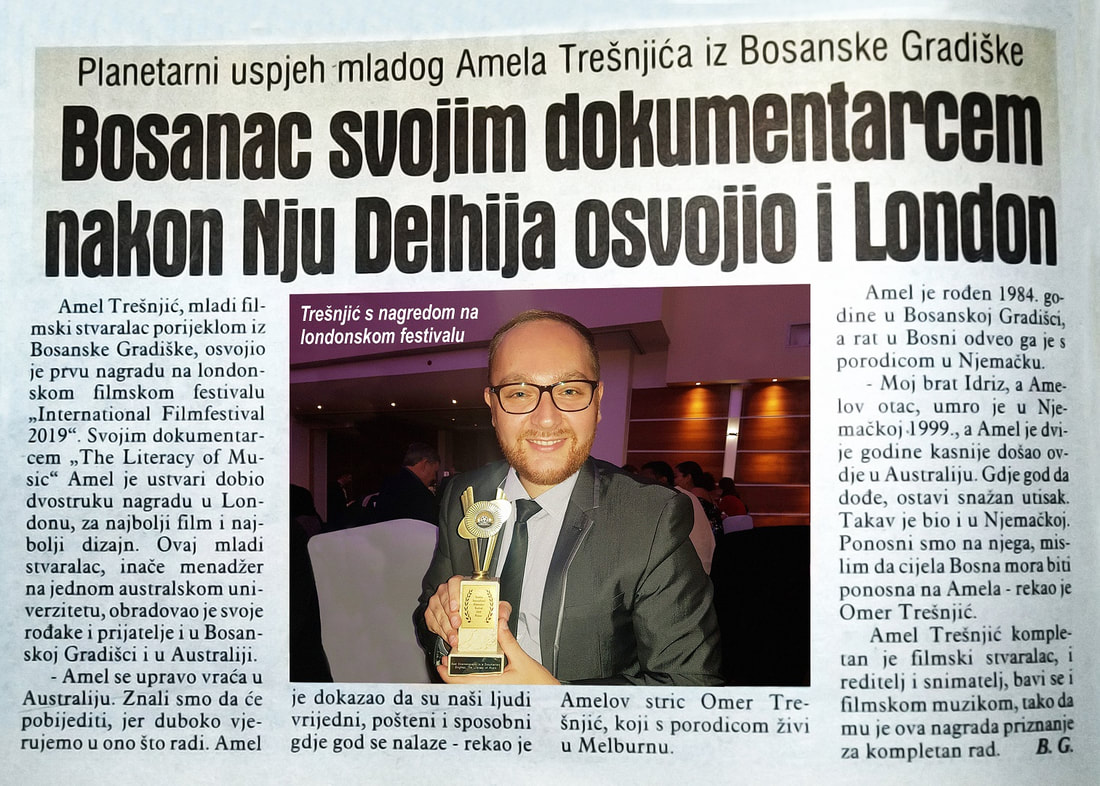 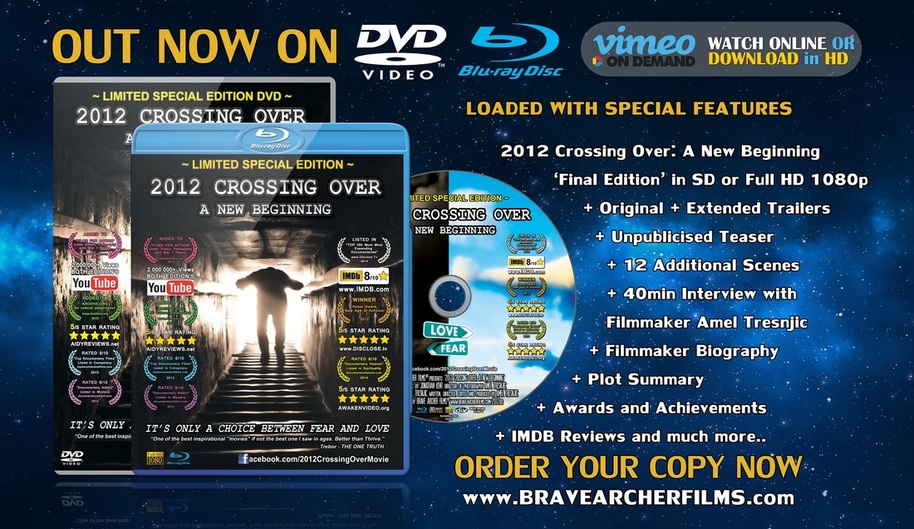 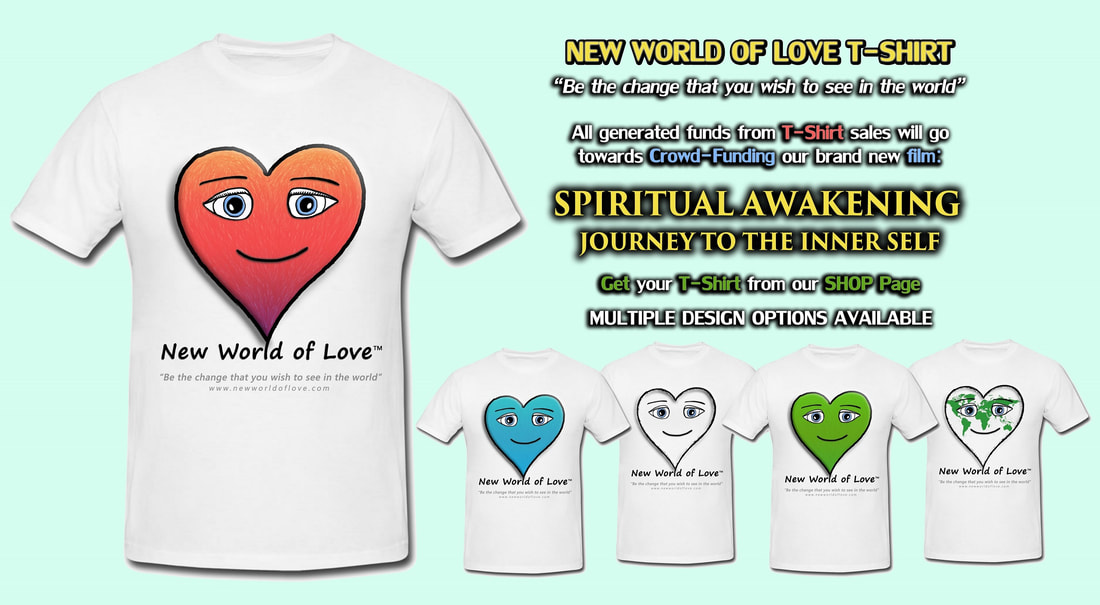 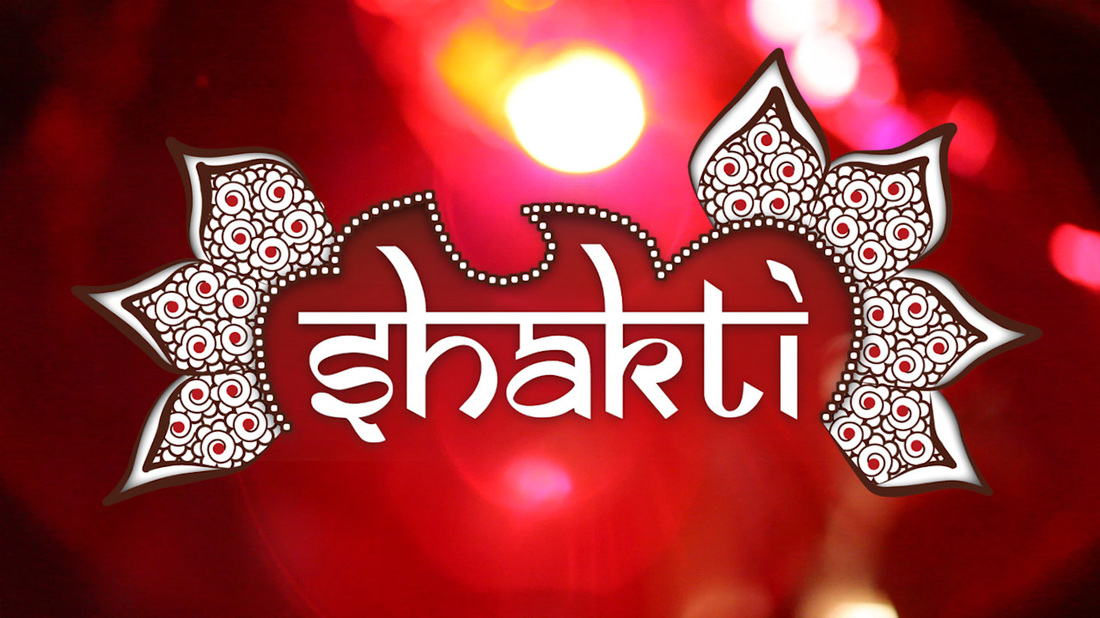 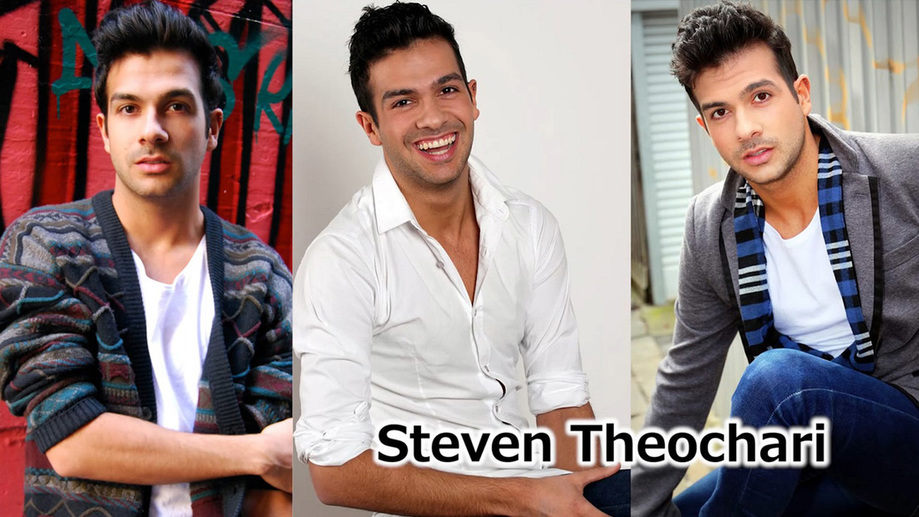 Hands on Learning and Robotics and Mechatronics Promos - Brave Archer Films ongoing work for Swinburne University of Technology resulted in two inspiring, informative and exciting new promotional films. The first promo entitled 'Hands-on Learning' explains the hands-on study experience that the Faculty of Engineering and Industrial Sciences has to offer, while in the second promo Robotics & Mechatronics students share their study experience at Swinburne University. To find out more about studying Engineering and Industrial Sciences at Swinburne visit: www.swinburne.edu.au/engineering 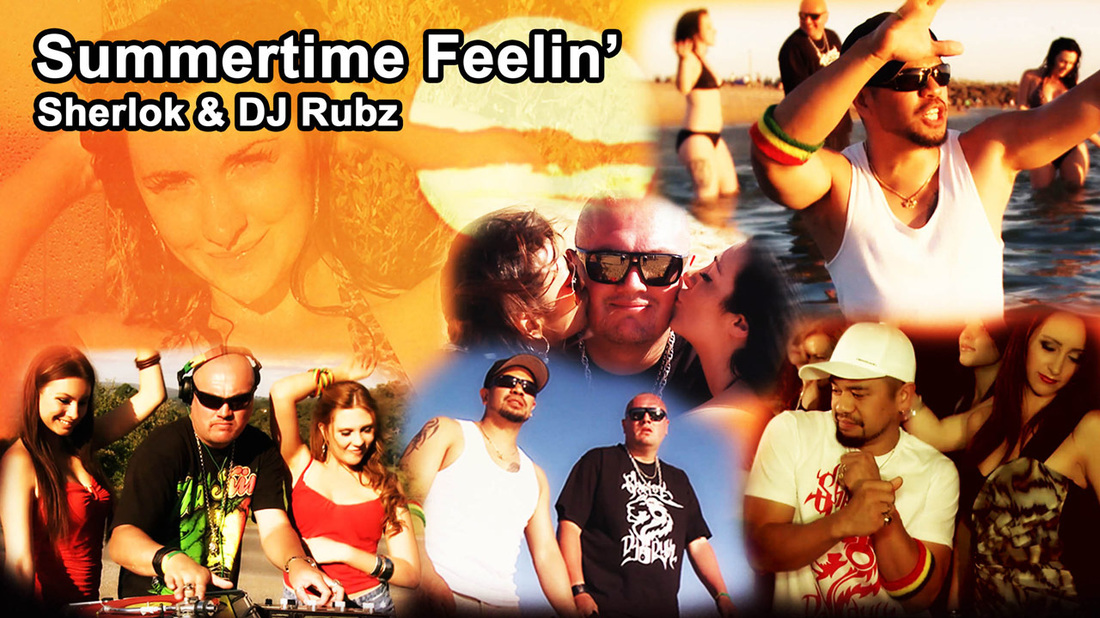 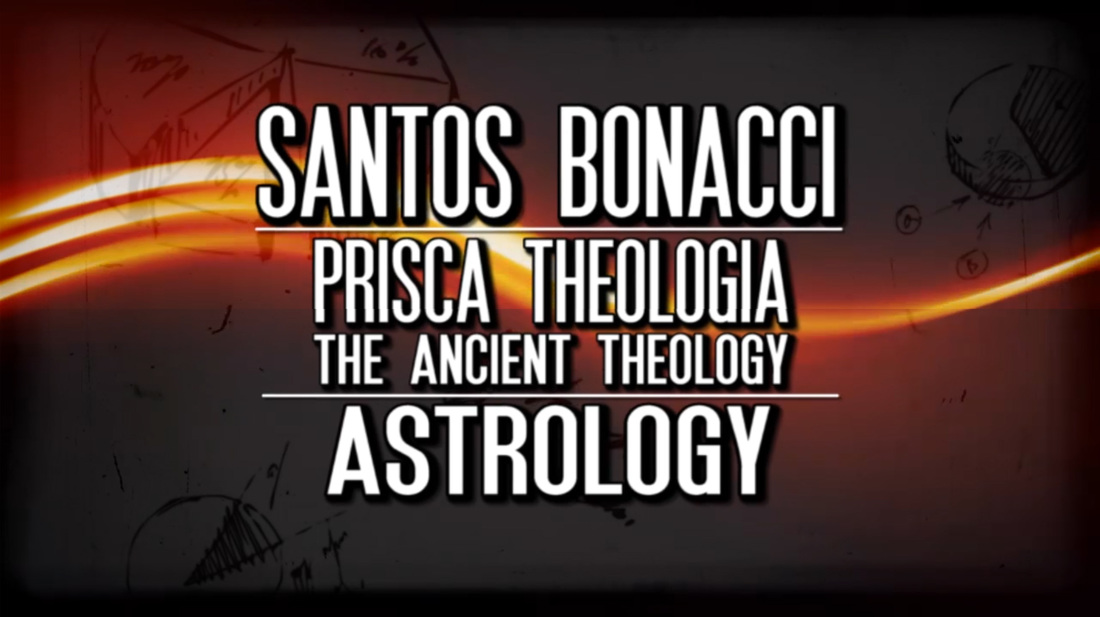 Live Event Seminar Filming Brave  Archer  Films captured  and edited a 3part seminar presented by Santos Bonacci (Expert Lecturer in Astronomy, Philosophy, Astrology, History and much more) entitled  'Prisca Theologia, The Ancient Theology.' During the filming of this 3part seminar, we met Santos and offered to interview him for our '2012 Crossing Over: A New Beginning' film. In this three part series, part one is on Astrology, part two on Astrotheology and part three on Occult Science.  Each  3hr  seminar was filmed  with  multiple HD cameras at  the 'Magpie  House'  in Melbourne's  Upwey suburb. For more  info  on  Santos Bonacci and his teachings visit his official YouTube Channel: youtube.com/mrastrotheology  or visit his official website universaltruthschool.com To watch the full lectures click on the following links:
You can also watch Santos Bonacci's previous lectures filmed by Brave Archer Films entitled 'Reclaiming Dominion, busting the fiction of law, religion and   science,' on the following link: https://www.youtube.com/watch?v=zz77ZKOasv0

Every year Brave Archer Films captures Swinburne Universities engineering student projects expo. The footage is edited into a short documentary/promotional film in where engineering students showcase their innovative final year projects. Below you will find three different promos created over the years. For more info on studying Engineering and Industrial Sciences at Swinburne visit: swinburne.edu.au/study
Highlights-Reel/Promo - Brave Archer Films recently edited a Highlights-Reel / Promo-Reel for an exciting new travel show entitled Tour The World with prominent  actor, presenter Adam  Ford. The 9min Reel is a condensed promo for the 30min pilot episode filmed in Cambodia, February this year. This very informative and entertaining travel series was produced by Late Night Media. For more info on this splendid show visit tourtheworld.com.au
You can watch the 9min Highlights-Reel above 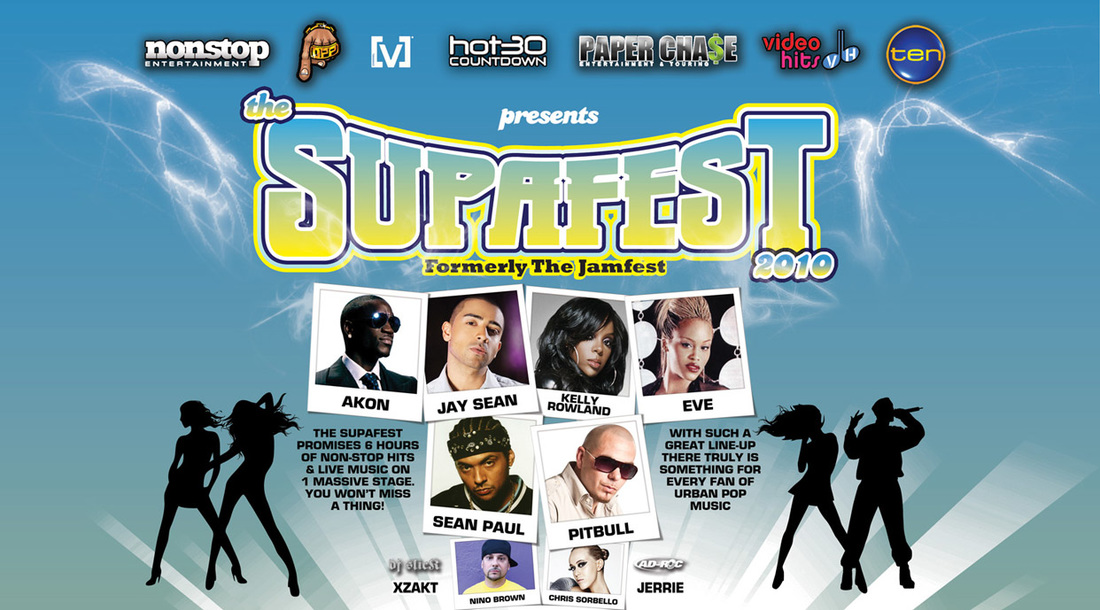 Brave Archer Films has recently joined forces with StarNow, a successful online casting and audition service provider that helps casting professionals find talent. With over 1 million registered members the StarNow talent directory features over 100,000 actors, extras, models, musicians, photographers, dancers and entertainers who are actively looking for opportunities. Brave Archer Films has recently attended their first “Actors 101 night” held at Sydney Film School and presented one lucky StarNow member with a Show Reel prize package worth over $500. The event provided young talents with vital information about the Creative Industry. It featured Casting Director Kari Harris, Actor’s Agent Marion Baird and Logie Nominated actress Camille Keenan. The evening was a great success and all attendees walked away with vast knowledge on how to successfully nail their next audition. Brave Archer Films is a proud supporter of StarNow. Create your StarNow basic profile free of charge and let your talents be discovered. For more info visit: www.starnow.com.au 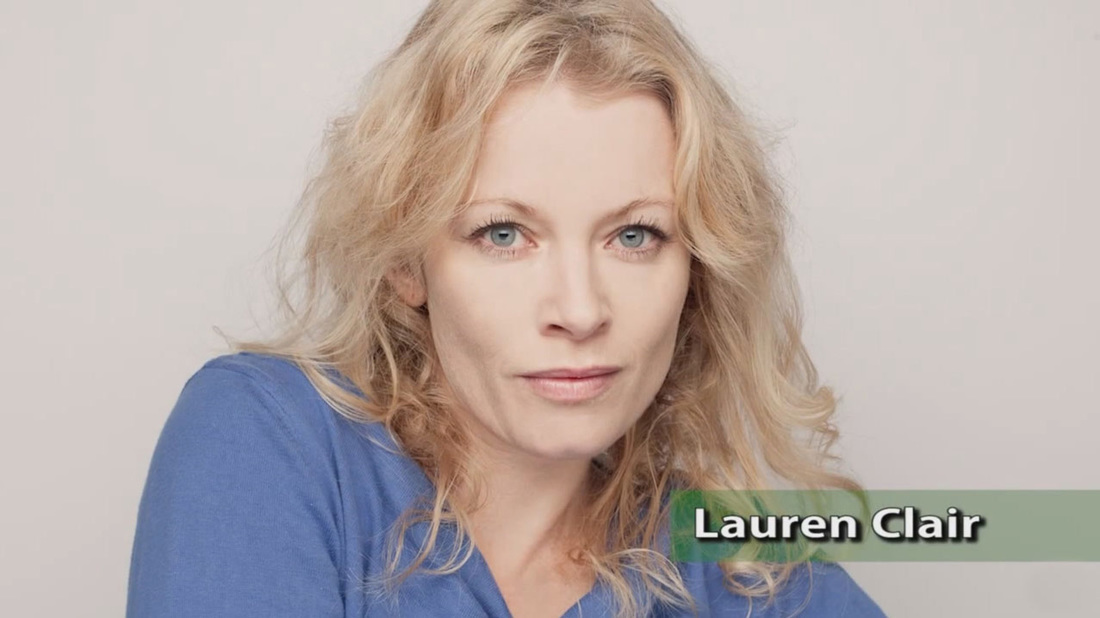 Acting Show Reels - Brave Archer Films recently edited together  two exceptional Show-Reels for prominent actress Lauren Claire. The 7min & 3min versions are filled with superb performances by an outstanding, professional and multi-talented actress who exuberates class. Lauren Claire has appeared in numerous Australian TV dramas, including, Blue Heelers, All Saints, Stingers, Carla Cametti PD, City Homicide, and Underbelly. This exceptionally, successful performer is renowned and respected in the Australian Film & Television Industry and was nominated for the 2009 LOGIE award for most outstanding performance in Underbelly. Watch both acting reels below: 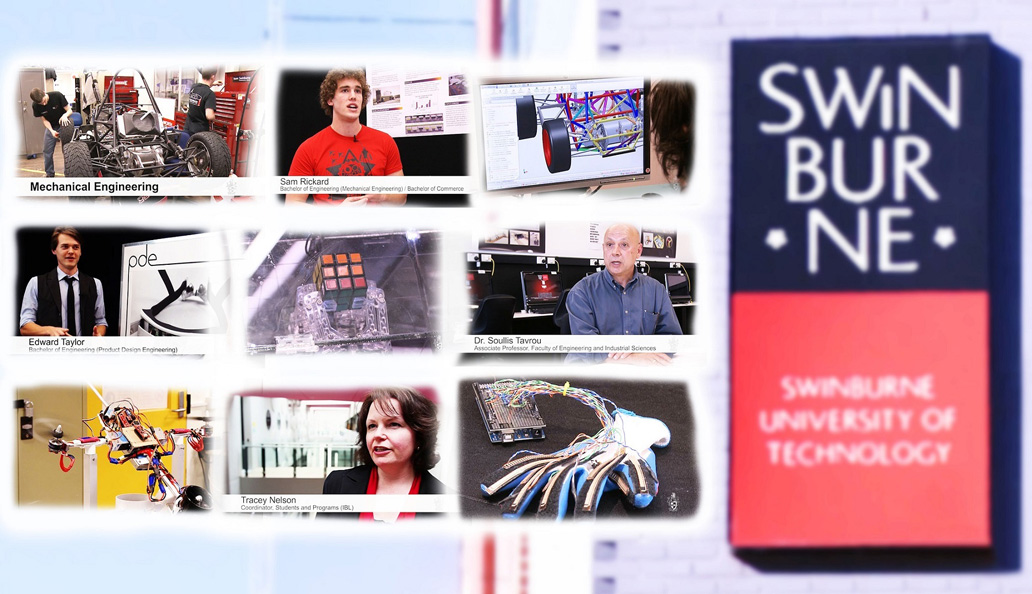 To view more of our previous works, visit our official YouTube channel: